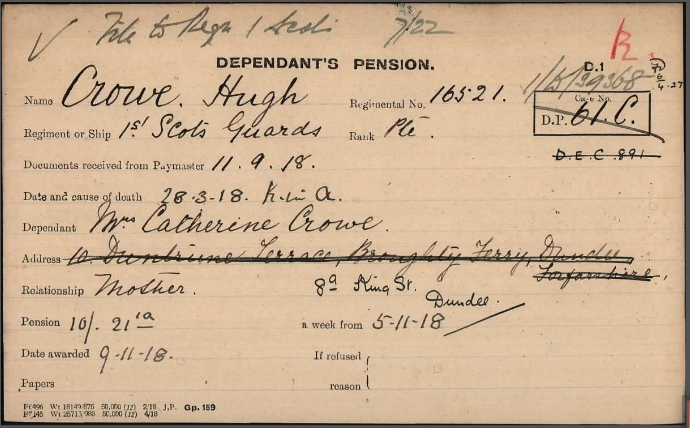 Hugh Drummond Crowe was born in Ayr on the 12th May 1885. He and his twin brother, James Symington Crowe, both worked as Detective Constables in the Lanarkshire Constabulary. Hugh was killed on the 28th March 1918 and on the same day, James was wounded and hospitalised. Their brother, Charles, was also in hospital recovering from wounds around the same time.

James Crowe, their father, served for more than 30 years in the Prison Service, beginning his service as a warder at Dundee Prison rising through the ranks. He retired from his position of Governor about a week before Hugh’s death.

In 1899 James Sr moved back to Barlinnie and eight years later was transferred to Peterhead Prison due to promotions. In 1909 he was appointed Governor of Dundee Prison.

Hugh’s twin James and his half brother Charles both served in the Scots Guards and were wounded but both survived the war.

Can you tell us more about Hugh Drummond Crowe'? Some additional facts, a small story handed down through the family or perhaps a picture or an heirloom you can share online. Contact our curator...