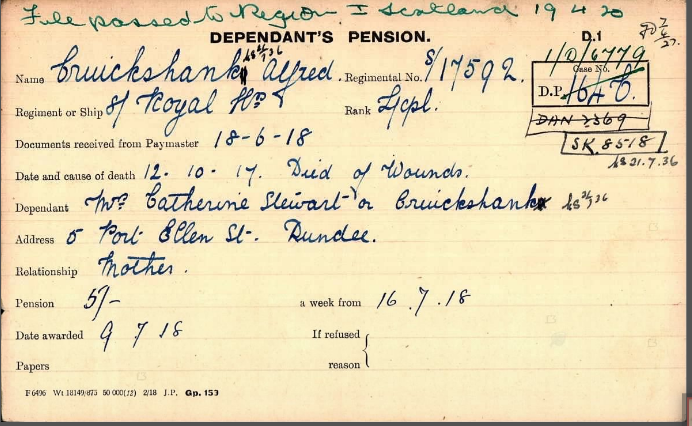 Alfred has no known grave but is remembered on the Tyne Cot Memorial. He was the brother of Trooper Alexander Cruickshank, 1054, Scottish Horse, who was killed in action, 01.10.1915.

Official Intimation was received yesterday by Mr James Cruickshank, 5 North Ellen Street Dundee, that his son, Lance-Corporal Alf Cruickshank, had been killed in action or had died from wounds.  Lance-Corporal Cruickshank, who was 22 years of age, was formerly an apprentice baker with Mr James D. Durkie, Hilltown.  He enlisted almost immediately after the outbreak of war in the Argyll and Southern Highlanders, and had seen about three years’ service in France.  He was wounded with the Argylls, and on returning to the front in October last was transferred to the Black Watch.  His brother, Trooper Alex. Cruickshank, of the Scottish Horse fell in action at Gallipoli, and another brother, Gunner Adam Cruickshank, R.G.A., is serving at Salonika.

Can you tell us more about Alfred Cruickshank'? Some additional facts, a small story handed down through the family or perhaps a picture or an heirloom you can share online. Contact our curator...