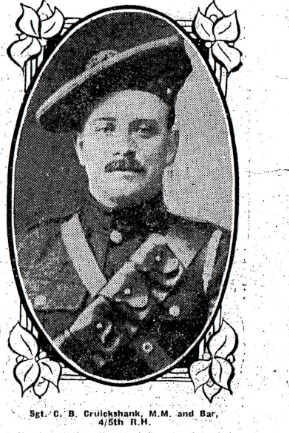 Sergeant George Cruickshank, M.M., Black Watch, was killed in action on 1st November while returning with the transport section of his battalion after taking up rations to the trenches.  Only three months ago, for the gallantry he displayed in taking up supplies under a heavy bombardment, Sergeant Cruickshank gained the Military Medal, and within recent days the announcement was made that he had been awarded a bar to the decoration.  News of the heroic sergeant’s death has been conveyed to Mrs Cruickshank, who resides with her four children at 72 Princess Street, Dundee, in a letter from an officer.

Sergeant Cruickshank was a Territorial before the war, and was mobilised with his battalion, in which he was transport sergeant.  He went to France in February, 1915, and had previously been wounded.  He was formerly a lorryman in the employment of Mutter, Howey, & Co.

Can you tell us more about George Brown Cruickshank'? Some additional facts, a small story handed down through the family or perhaps a picture or an heirloom you can share online. Contact our curator...