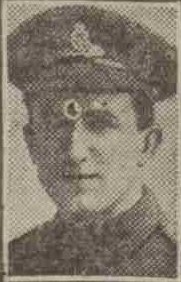 His many friends in Dundee will learn with regret of the death in action of Signaller Geo. Cussick, R.G.A., whose wife resides at 4 Morgan Street, Dundee.  Signaller Cussick, who was 28 years of age, enlisted under the Derby scheme, and had been in France for only about six weeks when he met his death.

Prior to joining the colours he was on the clerical staff of Messrs J. T. Inglis & Sons, Riverside Works, Dundee.  He was a son of Mr Bernard Cussick, Lintrathen Gardens, Dundee.

Can you tell us more about George Rea Cussick'? Some additional facts, a small story handed down through the family or perhaps a picture or an heirloom you can share online. Contact our curator...