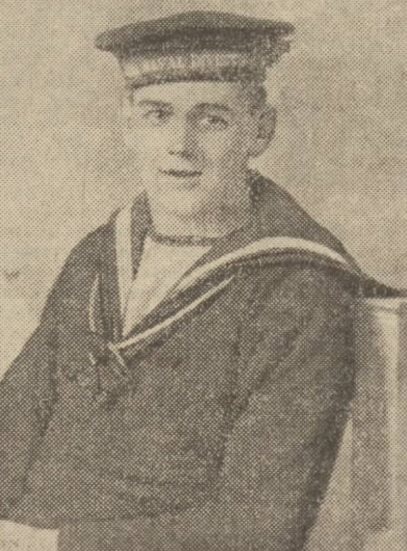 Born on 4 November 1891, Thomas was an overseer in Queen Victoria Works. He lived with his mother, Susan Cuthbert, at 27 Watson’s Lane, and joined the Royal Naval Division on 9 October 1914.

Temporary Lieutenant The Hon. K. R. Dundas, R.N.V.R., gave the following account of the action in which Thomas lost his life:- “We have just had a most exciting time. I was lying down at about 7am when I heard a sudden burr, & looking round saw the whole of our right bolting. Things looked pretty bad, but we charged out & reinforced the right, & drove off the Turks with heavy losses. For the time being, however, there was a bad panic, & had we not stopped the Turks few of us would be alive to tell the tale. I killed four Turks with my own fair hands & I know my men accounted for a good few.”

He is buried in Redoubt Cemetery, Helles, Turkey, XI. D. 16.

DUNDEE NAVAL DIVISION MAN KILLED. MEMBER OF THE ANSON BATTALION. Able Seaman Thomas Cuthbert, of the Anson Battalion, is another Dundee lad to meet his death in the Dardanelles operations.
Deceased’s home was 27 Watson’s Lane. Intimation has been received from the Royal Naval Division Record Office that a telegram from Alexandria states that A.B. Thomas Cuthbert (Clyde Z/973 R.N.V.R.) had been killed in action. He was 25 years of age, and was previously an assistant foreman in Queen Victoria Works. He was first attached to the Benbow Battalion, but subsequently was transferred to the Anson Battalion. The Courier, Thursday, 29 July 1915, 4.

Can you tell us more about Thomas Cuthbert'? Some additional facts, a small story handed down through the family or perhaps a picture or an heirloom you can share online. Contact our curator...