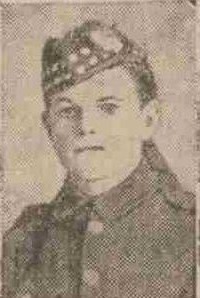 His sister, who resides at 10 Johnston’s Lane, West Port, Dundee, has received intimation of the death in action of Lance-Corporal John Dailly, Royal Scots.

The following is contained in a letter received from the Company Quarter-master-sergeant :–“I regret to inform you that Lance-Corporal Dailly was killed in action on 27th July coming back from the trenches.  A shell burst in the middle of his platoon, killing four men and wounding seven.  He was buried by the R.C. chaplain in a little cemetery here, and a rough wooden cross marks the spot.”

One of the officers of the deceased soldier’s company in a letter of sympathy says :–“He died doing his duty, a good and true British soldier.”

Lance-Corporal Dailly, who was 18 years of age, enlisted shortly after the commencement of hostilities, and was at the front for only nine weeks.  He was formerly employed in Grove Mill.

The father of the deceased soldier—Private William Dailly—is serving in the Black Watch.

Can you tell us more about John Dailly'? Some additional facts, a small story handed down through the family or perhaps a picture or an heirloom you can share online. Contact our curator...