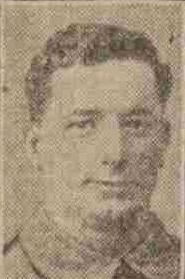 A.B. Alfred B. Dair, R.N.D., son of Mr and Mrs David Dair, 25 Robertson Street, has died as the result of wounds received in action.  Deceased enlisted four years ago, and went through the Dardanelles campaign.  Two years ago, he was drafted to France.  He had been previously wounded in the neck.  Prior to joining up he was employed as a fireman with the North British Railway Company Ltd.  Mr and Mrs Dair have three other sons serving—John, at present with the Scottish Horse in France; Alexander, in Mesopotamia; and Colin training with the Scottish Rifles.

Can you tell us more about Alfred Beedie Dair'? Some additional facts, a small story handed down through the family or perhaps a picture or an heirloom you can share online. Contact our curator...