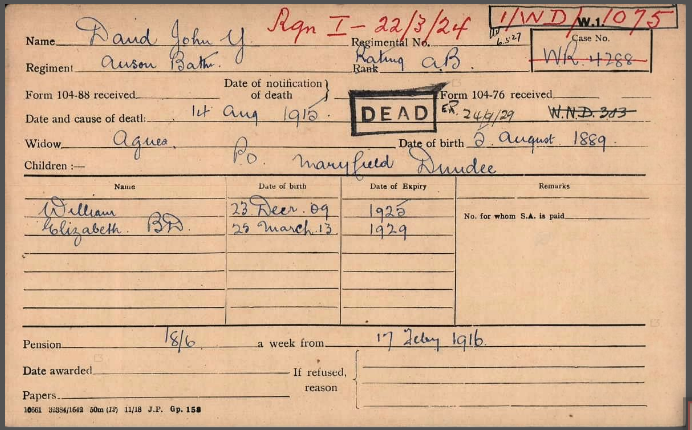 Johns address is also given as 7 McGill St, Dundee.

ONE BROTHER DEAD; ANOTHER TWICE WOUNDED.

Information has reached Dundee of the death at the Dardanelles as the result of an attack of enteric fever of A.B. John Younger Dand, 7 M’Gill Street.  Deceased, who was a son of the late Wm. Dand, plasterer, joined the Royal Naval Division shortly after the outbreak of war, and at the time of his death was serving with the Anson Battalion, having been transferred from the Benbow Battalion.  He was about 35 years of age, and leaves a widow and two young children.

Two brothers are also serving their King and country—Thomas, who is a member of the band of the Royal Naval Volunteer Reserve, and William, who is on board H.M.S. Dartmouth.  The former was present with the Dundee naval unit at the siege of Antwerp, and has been twice wounded since proceeding to the Dardanelles, having just rejoined his companions for the third time.  William has seen six years’ service in the navy.

Can you tell us more about John Younger Dand'? Some additional facts, a small story handed down through the family or perhaps a picture or an heirloom you can share online. Contact our curator...