We need you to tell us more about the life and times of David F. Stewart 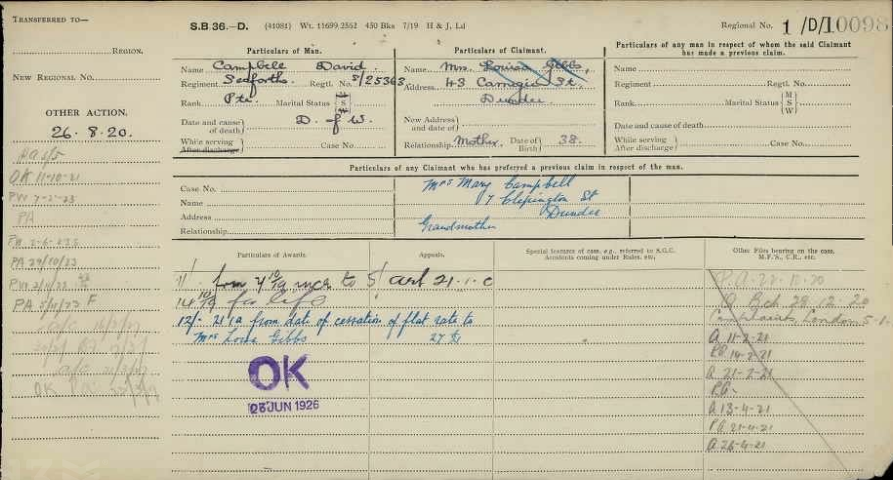 For reasons unknown David is not listed on the original Dundee Roll of Honour, but is remembered on the Peoples Journal War Memorial Supplement of 1925. There is no record of David Stewart, 25363, listed on C.W.G.C. S.D.G.W. or the Scottish National War Memorial, although his death was reported in the Dundee Courier.

The number 25363 was allocated to David Campbell, Seaforth Highlanders, who is listed on the original Dundee Roll of honour. The attached pension documents gives names and address’s for David Campbell 25363 which are also recorded for David Stewart 25363, it would appear that this is the same man, although there is no indication as to why they appear to be listed as two separate individuals.

Private David F. Stewart, Seaforth Highlanders, was a son of Mrs Gibb, 43 Carnegie Street, Dundee.  He enlisted seven months ago, when he was 18, and had been five weeks in France.  Deceased was a millworker.  Mrs Gibb’s husband, who is in the Black Watch, has been three years in France.

Can you tell us more about David F. Stewart'? Some additional facts, a small story handed down through the family or perhaps a picture or an heirloom you can share online. Contact our curator...