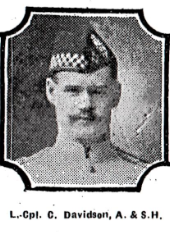 Clark has no known grave but is remembered on the Menin Gate Memorial.

Lance-Corpl. Clark Davidson, 1st Argyll and Sutherland Highlanders, a Dundee soldier who has had several remarkable escapes in France, is now posted as missing since 11th May.  His last letter to his wife, who resides at 45 Nelson Street, was dated 8th May.  He had a very narrow escape two days previously, as a shell burst quite near him killing two of his comrades.

FELL IN A TIME OF DREADFUL FIGHTING.

Although the death of Lance-Corporal Clark Davidson, of the 1st Argyll and Sutherland Highlanders, has not yet been officially reported, there is grave reason to fear that this Dundee soldier has laid down his life.

Some time ago he was reported missing, and Mrs Davidson, who resides at 45 Nelson Street, wrote a letter to the regimental chaplain seeking information.  She has received a reply from the Rev. Andrew S. G. Gilchrist, who officiates as chaplain to the 1st Argylls and the 2nd Camerons.  In the course of his letter, the Rev. Mr Gilchrist says :–“I have made inquiries about your husband, and am deeply sorry to tell you that there seems no doubt he was killed on May 11.  He had been along with a patrol doing some special duty, and, if I am not mistaken, none of the eight men came back.  That was a time of dreadful fighting, and very many gave their lives in the effort to hold our line.  I saw his captain, who told me he was sorry indeed to lose your husband, as he was a most excellent soldier, brave and trustworthy, and he asked me to offer you his sincere sympathy.  My own heart is sorry for you, as I know from experience what it means to part with a loved one.  He has put in his last march, fought his last good fight, and now he has received a crown of love from his great Captain.”

Lance-Corporal Davidson, who was 25 years of age, was a splendid type of British soldier, bearing an exemplary character.  Prior to enlisting in the Argylls five years ago, he was employed as a cloth inspector in Dundee. When war broke out he was in India, and came to this country with the Indian force.  Granted a few days leave, he was married in Dundee on 12th December.

Can you tell us more about Clark Davidson'? Some additional facts, a small story handed down through the family or perhaps a picture or an heirloom you can share online. Contact our curator...