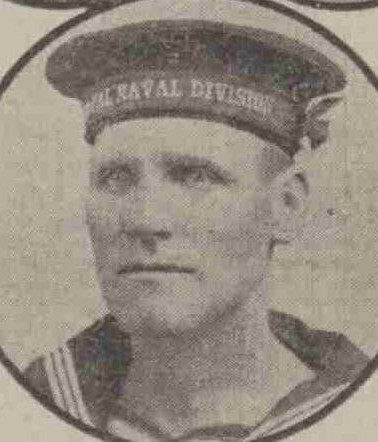 Joseph has no known grave but is remembered on the Helles Memorial.

NAVAL BRIGADE VICTIM AT THE DARDANELLES.

The death of Joseph Davidson, a Dundee member of the Drake Battalion, 1st Naval Brigade, has been notified to his wife, who resides at 41 Milnbank Road.

Sub-Lieutenant G. G. M’Hardy wrote in the following terms :–” I cannot tell you how grieved I am to have to report to you the death of your husband.  He was one of my section leaders, and was shot in the thigh while we were sweeping for snipers.  He died like a hero, and did his duty to the very last.  I had no more trustworthy man in my platoon.  He died very peacefully, and we buried him this morning, and erected a cross over his grave.  He was liked and respected by every one, and had he lived would have been recommended to the commander.”

O.S. W. L. Barrie. A Company, also referred in a letter to the high esteem in which deceased had been held, and remarked that, being an old soldier, he was able to give help and hints which they would all miss, but, apart from that, they all admired his unfailing cheerfulness and good nature.

Davidson, previous to joining the Drake Battalion, was employed in the city as hose pipe weaver.

Can you tell us more about Joseph Davidson'? Some additional facts, a small story handed down through the family or perhaps a picture or an heirloom you can share online. Contact our curator...