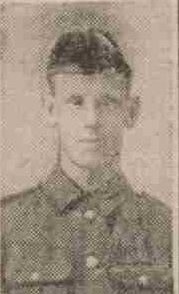 PRIVATE JAMES DAVIE OF THE FOURTH,

IS KILLED BY CHANCE BULLET

WHILE CLEANING HIS RIFLE IN THE TRENCH.

To the list of men of the 4th Black Watch who have laid down their lives there now falls to be added the name of James Davie.  His wife and child reside at 10 Court Street, Dundee, and intimation of her husband’s death has been conveyed to Mrs Davie in a letter from Capt. C. M. Couper.  Writing under date April 25, Captain Couper says :–

“It is with deep regret that I write to you to inform you that your husband was killed at 2.30 p.m. yesterday afternoon.  He was engaged in his duty, namely, cleaning his rifle, when he was shot by a chance bullet, which hit him at the base of the skull.  He was hidden below the parapet of the trench at the time, and it was by a series of unlucky events that he was hit at all.  Death was instantaneous.  We buried him last night in an orchard just behind the firing line after a short service.  He died a soldier’s death, the death we all want to die when our time comes—to go out quickly while doing our duty.  He will be much missed.  He is the first member of the old H Company to be killed, and he was also one of its oldest members.  I spoke to him just before his death, and he was very cheery, as he always was.  He used to say that soldering was a gentleman’s life.  Major Mair and Captain Boase both ask me to send you their deepest sympathy, and I beg you to accept my own.”

Q.M.S. W.F. Crighton has also written to Mrs Davie,  “I am very sorry.” He says, “at what has happened to your loving husband, but you can rest assured he died for a just cause, and a hero.  I have enclosed his letters, also his cap badge, which I know you will cherish.  You have the heartfelt sympathy of all the officers, n.c.o.s, and men of the company.”

Before the war Private Davie was employed as a labourer in the yard of the Dundee Shipbuilding Co., Ltd.

Can you tell us more about James Davie'? Some additional facts, a small story handed down through the family or perhaps a picture or an heirloom you can share online. Contact our curator...