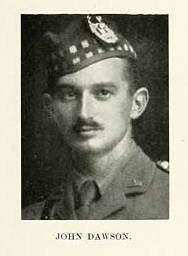 A large circle will learn with regret that Lieutenant John Dawson, 4th Gordon Highlanders, has been killed in action.

Lieutenant Dawson was the elder son of Mr David Dawson, headmaster of Hawkhill Public School, Dundee, and was a brilliant student who, had he lived, would have gone far in academic distinction.

Colonel Alexander Lyon, of the 4th Gordons, writing to Mr Dawson, states :–“Your son led his platoon, and captured a portion of a German trench, and it was then that he was hit by a shell burst and killed.  I am glad to say death was instantaneous.  It is exceedingly sad that we could not recover his body.  I cannot speak too highly of your son’s work in the battalion since he came to us.”

Lieutenant Dawson was dux medallist at the Harris Academy in 1909, and, proceeding to St Andrews University, he gained, among other honours, the Giltillan and Spence Bursaries, was the Blair Greek prize-winner two years in succession, and was the Ramsay Scholar in Classics in 1912-13 and the Berry Scholar in 1913-14, and finally graduated with first-class honours in classics and economic science, and was capped a year ago B.Phil.  He was then awarded a Carnegie research scholarship.

In his second year at the University he gained the Gladstone Memorial Prize for an essay on “Conscription.”

While at St Andrews Lieutenant Dawson was a member of the O.T.C., and was gazetted second-lieutenant in the Gordons in April.  After a period of training at Bedford and Aberdeen with the 3d Battalion he crossed to France on his twenty-third birthday (August 20).  Widespread sympathy will be extended to Lieutenant Dawson’s parents.

Can you tell us more about John Dawson'? Some additional facts, a small story handed down through the family or perhaps a picture or an heirloom you can share online. Contact our curator...