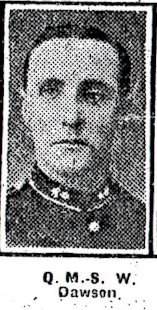 TO WOUNDS RECEIVED IN ACTION.

The list of Dundee heroes who have given their lives for their country is being added to almost daily.

Information has been received of the death of Private William Dawson, of the 1st Dorset Regiment, who was a native of Dundee, and who acted as a postman in the city for about two years.  About seven years ago Private Dawson was transferred from Dundee to Dunoon, where he served until May of this year, when he received an appointment in Glasgow.

The news was received by Mrs Dawson, who has been residing with her mother at 27 Ogilive Street since the beginning of the war.  Mrs Dawson received three communications from a chaplain with the Expeditionary Force.  The first note reported that Private Dawson had received wounds while in action, the second held out little hope for his recovery, and the third intimated that he had died at No. 8 General Hospital, Rouen.

In one of the letters the chaplain said of Private Dawson :–“He is a brave fellow, and has tried to keep bright in spite of much discomfort and suffering.  He feels greatly for your anxiety, and wishes me to tell you that he is in excellent hands.”

In the last letter intimating Private Dawson’s death the chaplain says :__ “He will be buried in a little cemetery near the hospital, his body being carried to the grave by his comrades, surrounded with a French guard of honour, and the coffin will be covered with the Union Jack__the flag that he died for__and flowers.”

Private Dawson, who was thirty-three years of age, served throughout the whole of the Boer War.  He is survived by a widow and three children.

Private George Kinnear, a brother of Mrs Dawson, is serving with the Royal Scots in France.  About six weeks ago he was in Aldershot, where he was being attended to for wounds received in the Battle of Mons.  He was unable to obtain a few days’ leave, and had to return to the fighting line without getting a glimpse of home.  No word has been heard of him since that time.

Can you tell us more about William Dawson'? Some additional facts, a small story handed down through the family or perhaps a picture or an heirloom you can share online. Contact our curator...