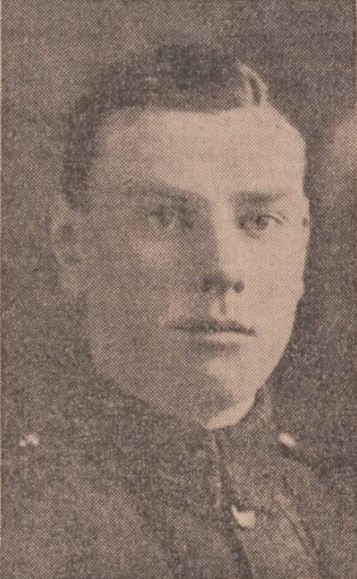 Ralph has no known grave but is remembered on the Le Touret Memorial.

The 4th Black Watch, ‘Dundee’s Own’, suffered its first fatal casualty on 6 March 1915, since arriving at Le Havre on 26 February.
1871 Cpl. Ralph A. Y. Dick, son of Mr James Dick, watchmaker and jeweller, Victoria Road, Dundee, was killed by a stray bullet while on duty in a ‘picquet in advance of the firing trenches’, aged only 19. Information concerning his death was contained in a letter from Captain E. L. Boase, wo would be killed at High Wood while serving with the 7th Black Watch on 30 July 1916.
Cpl. Dick is commemorated on the Le Touret Memorial, Pas de Calais, France.

CORPORAL DICK IS SHOT WHILE IN THE TRENCHES. The first casualty in the 4th (City of Dundee) Battalion of the Black Watch has to be recorded.
Corporal R. A. Y. Dick, son of Mr James Dick, wartchmaker and jeweller, Victoria Road, Dundee, has given his life for his country.
It is only a little over a fortnight ago that the gallant lads took their departure from their native city amid scenes of the greatest enthusiasm. It was on Thursday last that a portion of the battalion entered the trenches, and within a few short hours one of their number was killed.
The sad intelligence of the death of Corporal Dick was received in the shape of a letter from Captain E. Leslie Boase, dated 6th inst. Captain Boase states that Corporal Dick was killed on the day of writing. “He had the honour to go out to a picquet in advance of the firing trenches. He told the captain who took me out to this advance picquet that he did not feel a bit frightened as he rather expected to; he seemed just in his place. He was struck by a sort of stray bullet – it may have been a ricochet – which caught him in the head. He dropped, and passed away at once. He will be buried on Sunday in a little cemetery here.”
Corporal Dick was but nineteen years of age, and was a young man of splendid physique.
Educated at Dundee High School, he entered the office of Messrs Alexander Tosh & Son, chartered accountants, Reform Street, Dundee. He joined the 4th Black Watch Territorials early last year, and was with his usual zeal he threw his heart and soul into the work, with the result that at the training camp at Monzie in July he obtained his first strip [sic].
Further promotion awaited him, and he was raised to the rank of corporal shortly before the battalion left for the front.
Corporal Dick was of a very cheery disposition, and no matter how dark the clouds were he always saw the sunny side. To know him was to cherish him as a friend. The Evening telegraph and Post, Wednesday, 10 March 1915, 1

Can you tell us more about Ralph Alexander Young Dick'? Some additional facts, a small story handed down through the family or perhaps a picture or an heirloom you can share online. Contact our curator...