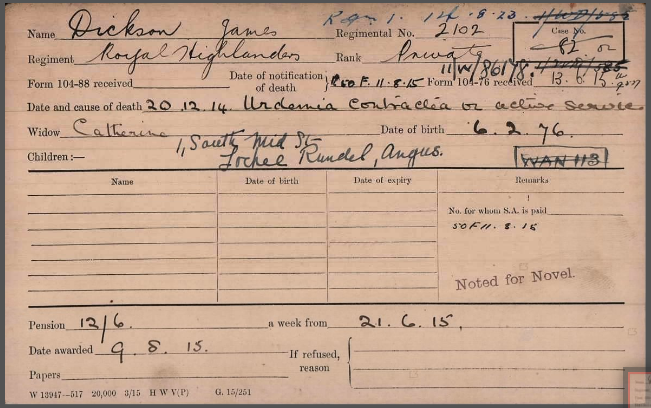 The funeral of James Dickson (40), assistant foreman in Camperdown Jute Works, too place on Tuesday, and was attended by military honours.

Deceased, who was very popular among his fellow-workers, had been a member of the Black Watch, and had seen service in India and South Africa.  At the home of deceased service was conducted by Rev. Mr Johnston, St Margaret’s Episcopal Church, and thereafter the cortege proceeded to Balgay Cemetery via the High Street and Ancrum Road, the pipe band of the Black Watch playing “The Flowers of the Forest” and the “Land o’ the Leal.”  The streets were crowded with sightseers. After service at the grave a squad of Territorials fired three volleys, and the remains of the dead soldier were committed to their last resting place.

Can you tell us more about James Dickson'? Some additional facts, a small story handed down through the family or perhaps a picture or an heirloom you can share online. Contact our curator...