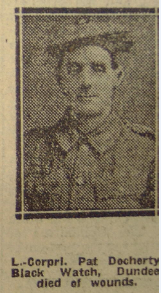 A comrade writing home states that Lance-Corporal Docherty was wounded and buried under a large quantity of debris through an enemy shell exploding in the British lines.  His comrades dug him out, and he received medical attention, but his wounds were so serious that he passed away after a short time.  The writer concludes with the following glowing tribute :–“He was a brave soldier, and died at his post.”

The deceased soldier enlisted in September, 1914, and had been at the front for a year.  During the time he was on active service Lance-Corporal Docherty was twice wounded.  There was only a month between the previous occasion and the date on which he was mortally wounded.  He was 33 years of age, and was prior to enlistment employed in the shipyard of the Caledon Shipbuilding and Engineering Company, Limited, Dundee.

Can you tell us more about Patrick Docherty'? Some additional facts, a small story handed down through the family or perhaps a picture or an heirloom you can share online. Contact our curator...