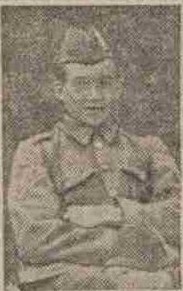 DUNDEE SOLDIER WRITES “I AM WELL,”

AND HIS WIFE LEARNS NEXT DAY OF HIS DEATH.

To learn one day that her husband was alive and well and next day received news of his death has been the sad experience of Mrs Docherty, 1 Blackness Road, Dundee.

Sergeant William Docherty joined his regiment, A Company 3rd Black Watch, ten years ago, and was, on the outbreak of war, sent to the Continent with the second Expeditionary Force.  He took part in the memorable retreat from Mons, and had been in the thickest of the fighting following that.  On 13th November he fell victim to four bullet wounds, which he received in the back, both arms, and left leg.

A pathetic circumstance is that in a letter to his wife, dated 8th November, Sergeant Docherty wrote :___”Would you kindly send me a photo of little Jeanie, as I would like to look at it often.  Tell her her daddy is alive and well, and hopes to be home at the end of the war.  They are publishing the lists of the killed, wounded, and missing, I understand.  Well, I hope my name will never figure in them.”

Deceased was 28 years of age, and was a millworker in the city prior to the war.

Can you tell us more about William Docherty'? Some additional facts, a small story handed down through the family or perhaps a picture or an heirloom you can share online. Contact our curator...