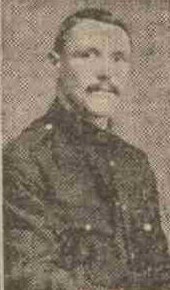 AN OLD CAMPAIGNER DIES OF WOUNDS.

The circumstances attending the death through wounds of Private G. Dodds, 4 John Street, are pathetic in the extreme.  The intimation of her husband’s wound found Mrs Dodds in indifferent health, and the news affected her greatly.  The report was not official, but was contained in a letter from a comrade, who wrote that Private Dodds had been wounded in the head by a piece of shrapnel shell on March 28.  No further word reached the anxious woman until yesterday, when a visitor informed her that her husband’s name was in a casualty list as having died of wounds.

Private Dodds was an old campaigner, who saw extensive service in South Africa.  Before throwing in his lot with the “Fourth,” he was with the Royal Field Artillery for sixteen years.

He passed through the Boer War without receiving an injury of any kind.  Private Dodds was generally employed as a Dock labourer, but at the time of his donning the dark tartan he was engaged as a calender worker with Gilroy, Sons, & Co., Ltd.  He is survived by his widow and a family.

Can you tell us more about George Dodds'? Some additional facts, a small story handed down through the family or perhaps a picture or an heirloom you can share online. Contact our curator...