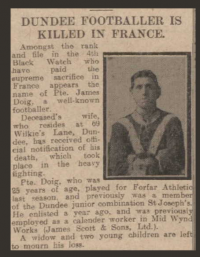 DUNDEE FOOTBALLER IS KILLED IN FRANCE.

Amongst the rank and file in the 4th Black Watch who have paid the supreme sacrifice in France appears the name of Pte. James Doig, a well known footballer.

Deceased wife, who resides at 60 Wilkie’s Lane, Dundee, has received official notification of his death, which took place in the heavy fighting.

Pte. Doig, who was 25 years of age, played for Forfar Athletic last season and previously was a member of the Dundee junior combination St Joseph’s.  He enlisted a year ago, and was previously employed as a calander worker in Mid Wynd Works (James Scott & Sons, Ltd.).  A widow and two young children are left to mourn his loss.

Can you tell us more about James Doig'? Some additional facts, a small story handed down through the family or perhaps a picture or an heirloom you can share online. Contact our curator...