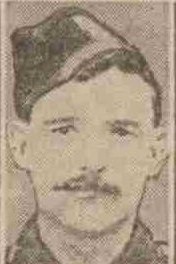 Private John Dolan, Royal Scots Fusiliers, has been reported missing since 30th July.  Pte. Dolan, who is a Dundee man, was employed as a hammerman with Cooper & Greig, Ltd., engineers, Britannia Works, prior to enlistment this year.  He had been but a short time in the fighting zone, but had been previously connected with the militia.  Official intimation that he was missing was received by his father, Mr James Dolan, 1 North George Street, Dundee.  Private Dolan has a son in France in the Royal Field Artillery.  He is a widower, and has four of a family.

Can you tell us more about John Dolan'? Some additional facts, a small story handed down through the family or perhaps a picture or an heirloom you can share online. Contact our curator...