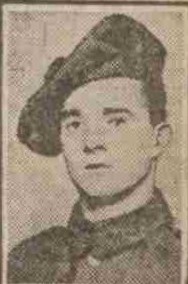 A fine but sad record is that of Mrs Dolan, 65 Nethergate, Dundee.  Intimation has reached her that her son Pte. John Dolan, Black Watch, has died of wounds received in action.  This is the third of Mrs Dolan’s four soldier sons to make the supreme sacrifice, David, Black Watch, and Martin, Connaught Rangers, having both been killed on the field of battle.   Charles, the last of the four is serving with the Tank Corps.  John was 21 years of age, and had been in the army for four years, the most of that time having been spent at the front.  He was formerly employed in Grove Mills.  Mrs Dolan is a widow.

Can you tell us more about John Dolan'? Some additional facts, a small story handed down through the family or perhaps a picture or an heirloom you can share online. Contact our curator...