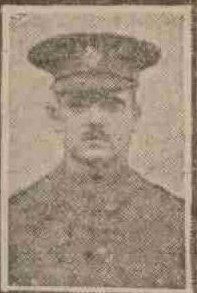 OF HIS BROTHER’S DEATH

Mrs Dolan, who resides at 65 Nethergate, received the sad news from another son, Lance-Corporal David Dolan, who is at present serving in the fighting line with the Black Watch.  A postcard from her son stated that his brother was wounded in the severe fighting on 11th November and that he died from his wounds on the 25th.

Private Dolan had served about three years with the Connaught Rangers, and was stationed at Aldershot when war broke out.  Prior to enlisting he served his apprenticeship as a plumber with Messrs John Farquharson & Son, 151 Perth Road.  Two other sons of Mrs Dolan joined the Colours after the outbreak of hostilities.  Lance-Corporal Charles Dolan is serving with the Royal Engineers, while John is a private in the 3rd Black Watch.  Mrs Dolan is a widow.

Can you tell us more about Martin Dolan'? Some additional facts, a small story handed down through the family or perhaps a picture or an heirloom you can share online. Contact our curator...