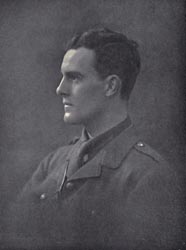 Archibald was the brother of Lieutenant Robert McPherson Don, 10th Battalion Black Watch who was killed in action between 08.05.1917 & 09.05.1917. Both brothers are remembered on a family gravemarker in Barnhill Cemetery, Broughty Ferry.

His brother, Captain Francis Percival Don also served during the Great War, initially with the Scottish Horse before transferring to the Royal Flying Corps, first as an observer and then as a pilot with 22 Squadron. He lost an arm during his service and was also taken prisoner in 1917. Captain Don continued his career in the Royal Air Force and was appointed Air Vice Marshall.

The death in hospital of Second-Lieutenant William Robertson Don, Black Watch, has just been announced.

Lieutenant Don, who was 25 years of age, was the fourth son of Mr R. B. Don, Tealing House, Forfarshire.  He was educated at Horrishill Preparatory School, Winchester College and Trinity College Cambridge.  He took a Senior Scholarship and a First Class in the natural science tripos and leaving College became a medical student at St Bartholomew’s Hospital, London.  Shortly after the outbreak of war Lieut. Don went to France and worked on a motor ambulance.  He applied for a commission on his return, and was gazetted second-lieutenant in the Black Watch in December, 1914.  Lieut. Don was specially interested in geology, and was a Fellow of the Royal Geological Society.

Can you tell us more about Archibald William Robertson Don'? Some additional facts, a small story handed down through the family or perhaps a picture or an heirloom you can share online. Contact our curator...