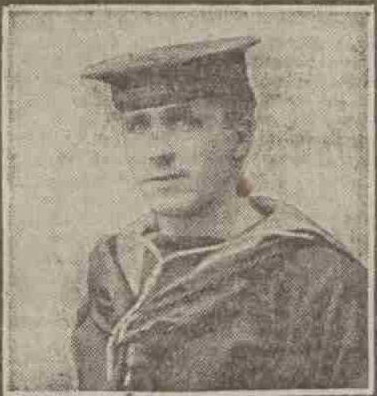 Wallace has no known grave but is remembered on the Chatham Naval Memorial. He was serving aboard H.M.S. Hawke, a Cruiser built in 1891. She was patrolling in the North Sea off the coast of Aberdeen when on 15.10.1914 she was struck by a single torpedo fired from German Submarine U-9 and quickly capsized with the loss of 524 crew. 70 crew survived the sinking.

DUNDEE STOKER ON BOARD THE HAWKE

IS THOUGHT TO HAVE PERISHED.

That agony of suspense which is almost as hard to bear as actual sorrow, is the portion of Mrs W. Donachey, who resides at 7 Rose Street, Dundee.

Wallace Donachey, her husband, was a stoker on board the ill-fated “Hawke,” and his name does not appear in the list of survivors, the gravest doubts are entertained as to his safety.

Donachey, had served twelve years in the navy, and only this year was placed on the reserve ranks.  The circumstances of the of the case are of the most tragic description, for the missing sailor who was only 33 years of age, was married by special licence on the morning of the very day he was called up, and left the city the same night.  Donachey having secured employment as a stoker at Kirriemuir Gasworks, the young couple intended to take up their residence there, but these plans were all shattered in the most tragic fashion on the outbreak of war.

The terrible strain of waiting is naturally telling very heavily on the young wife, but as no official intimation is forthcoming as to the stoker’s fate, there is still some ground for hope.

Can you tell us more about Wallace Donachey'? Some additional facts, a small story handed down through the family or perhaps a picture or an heirloom you can share online. Contact our curator...