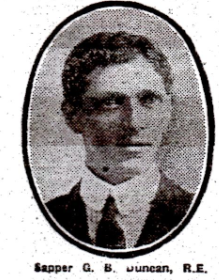 An employee of the Dundee Tramways Corporation, who was one of the three brothers serving, has been the victim of a German shell.  He is sapper George B. Duncan, Royal Engineers, son of Mrs George Duncan, 175 Lochee Road, Dundee, and late of Birkhill.

Intimation of Sapper Duncan’s death in action has been received by his mother.  He was killed instantaneously as the result of a shell bursting in a trench in which a party of Engineers were located.  Deceased was 29 years of age.  Previous to enlistment he was a tramcar driver, and was greatly respected by his fellow employees.  Much sympathy is being felt for his widowed mother in her bereavement.

Can you tell us more about George Boyd Duncan'? Some additional facts, a small story handed down through the family or perhaps a picture or an heirloom you can share online. Contact our curator...