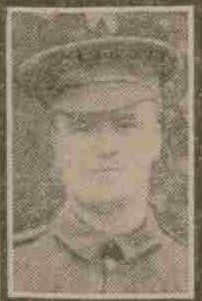 Pte. John Duncan, Scots Guards, whose photograph is reproduced, was killed in action on 15th Sept.  Private Duncan enlisted on the outbreak of war, and had been at the front for about eighteen months.  He was wounded about twelve months ago.  Deceased who was 23 years of age, was, prior to enlistment, employed by John Durham & Son, printer, Overgate, Dundee.  His sister resides at 22 Willison Street, Dundee.

Can you tell us more about John Duncan'? Some additional facts, a small story handed down through the family or perhaps a picture or an heirloom you can share online. Contact our curator...