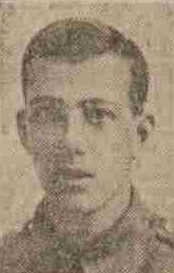 Intimation has been received of the death in action of Private James Duncan, Royal Scots, son of Mr and Mrs Wm Duncan. 1 Lytton Street.  Pte. Duncan, who enlisted when he was 18 years of age, had been at the front for the last ten months, and had been twice wounded.  Prior to enlisting he was in the employment of Stewart, Kennedy, & Co., merchants, Dundee, and was well known in Volunteer circles as a signaller in the Dens Road Company.

Can you tell us more about James Duncan'? Some additional facts, a small story handed down through the family or perhaps a picture or an heirloom you can share online. Contact our curator...