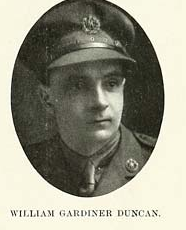 William Duncan enlisted early in the war and saw much fighting in France. He received a commission and was transferred to the RAF as an observer. He was shot down along with his pilot flying flying aircraft DH9 D1012 within enemy lines.

William enlisted as a private in the 23rd (Service Battalion) 2nd Sportsmans, Royal Fusliers, City of London Regiment before transferring to the R.A.F.

Formerly of the Royal Fusiliers

Private W. G. Duncan, Royal Fusiliers, a member of the staff of the Morgan Academy, who enlisted in the early stages of the war, has been seriously wounded in the recent fighting.  He was hit in several places by shrapnel, and is at present in hospital at Rouen.

Private Duncan, who is an M.A. of St Andrews University, is the only son of Mr David Duncan, clerk to Dundee Burgh Insurance Committee, and who is also a member of the Parish Council.  He held the post of assistant master in the classical department of Morgan Academy, and was much respected by the other members of the staff of the Academy as well as by the pupils in his classes.  Private Duncan, who joined the Sportsmen’s Battalion had been at the front since November.

Mr David Duncan, Balgay Road, Dundee, yesterday received intimation that his only son, Second-Lieutenant William G. Duncan, Royal Air Force, is missing.  Lieutenant Duncan, enlisted in January, 1915, in the Royal Fusiliers, and went to France with that regiment.  He received his commission in the Royal Air Force this year, and has been at the front for some time.  Prior to joining up he was a teacher of classics in Morgan Academy. Lieutenant Duncan, is an M.A. of St Andrews University.

By the death on military service in France of Second-Lieutenant William G. Duncan, of the Royal Air Force, a Forfar lady has been bereaved of her husband, Mrs Duncan, who was wedded only five months ago, being a daughter of Mr John Winning, 12 John Street.  Lieut. Duncan, who was the only son of David Duncan, Parkview, Balgay Road, Dundee, was a graduate of St Andrews University, and prior to enlisting in January, 1915, was engaged as teacher of classics in the Morgan Academy, Dundee.  He served in France for a considerable time with the Royal Fusiliers, and received his commission in the Royal Air Force in the early part of this year.  He had been posted as missing since June, and is now officially reported to have been killed.

Can you tell us more about William Gardiner Duncan'? Some additional facts, a small story handed down through the family or perhaps a picture or an heirloom you can share online. Contact our curator...