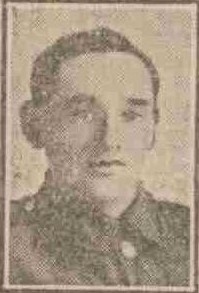 Pte. William Dye, Royal Scots, was posted missing on 1st August, 1917, but official intimation has now been received that he has been presumed to have been killed on that date.  Pte Dye was a son of the late Mr David Dye, chimney-sweep, 18 Walton Street,  He enlisted in 1915, and was previously employed in Logie Works.

Can you tell us more about William Dye'? Some additional facts, a small story handed down through the family or perhaps a picture or an heirloom you can share online. Contact our curator...