We need you to tell us more about the life and times of Frederick W. Edwards 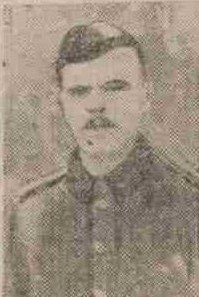 Frederick has no known grave but is remembered on the Menin Gate Memorial.

Information has been received of the death in action of Pte. F. W. Edwards, a Dundee member of the Cameron Highlanders.  Pte. Edwards, who is stated to have been killed on 5th April, was a son of Mr D. I. Edwards, 34 Hilltown, and was the sole support of his father.  He was 30 years of age.  Pte. Edwards was employed as a dock labourer when war broke out, and his time was up on the very day mobilisation orders were issued.  His discharge papers came after he was away.  Pte. Edwards was wounded on 5th November, and after a period in hospital he was home at the end of last year on a fortnight’s furlough.  He subsequently was sent back to the front.  When serving his time in the army Pte. Edwards was on foreign service in South Africa and also the far east.

Can you tell us more about Frederick W. Edwards'? Some additional facts, a small story handed down through the family or perhaps a picture or an heirloom you can share online. Contact our curator...