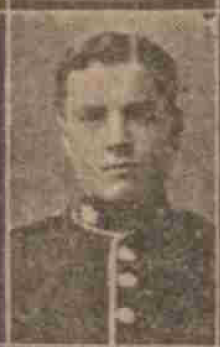 Information has reached friends in Monifieth that Lance-Corporal John Arkly Elder, Royal Scots, has died from malarial fever at Salonika.

Lance-Corporal Elder joined the Royal Scots five years ago, and was on service in India when war broke out.  He was drafted to France, and took part in the fighting of the early stages of the war.  His mother, who resides at 40 Watson’s Lane, Dundee, is well known in Monifieth.

Another member of an old Monifieth family has made the supreme sacrifice at the front.   Information has been received that Lance-Corporal John Arkly Elder, 1st Royal Scots, died in the Canadian Hospital, Salonika, from malarial fever on 28th November.

Lance-Corporal Elder joined the Royal Scots five years ago and was on foreign service in India when was broke out.  He was drafted over to France, and took part in the fighting heavy of the early part of the war.  Later he was sent to another front.

His mother resides at 40 Watson’s Lane, Dundee, is well known to the older residenters of Monifieth.

Can you tell us more about John Arklay Elder'? Some additional facts, a small story handed down through the family or perhaps a picture or an heirloom you can share online. Contact our curator...