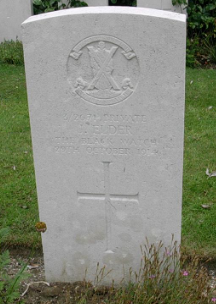 On 29 July 1915, ‘The Courier’ published a photograph of 2212 Private Henry Elder, 4th Black Watch, who had been grievously wounded at the Aubers Ridge.
One of five soldier brothers, the sons of Mr Elder, 25 Ryehill Lane, Dundee, Henry enlisted on 12 August 1914, aged 19.
He joined Dundee’s Own in France on 24 February 1915, participating in the battle of Neuve Chapelle a few days later. On 9 /10 May he volunteered as a bomber but was seriously wounded when a shell exploded as he crossed No Man’s Land. He suffered shrapnel wounds in both legs and both arms, and his eyes were affected by gas. The severity of his wounds necessitated the amputation of his right arm and his discharge on 16 January 1915.
The following account outlines the difficulties faced by wounded soldiers in the Great War. As a lithographer, Elder’s wounds threatened his livelihood, although his determination to learn to write and sketch with his left hand is testament to his courage and endurance.
The story also highlights the war’s impact on many families. Of his four brothers, James, a Private in the 1st Black Watch, was killed in action at Ypres on 29 October 1914, while another brother, also serving in Dundee’s Own, was shot through the spine and paralysed at Neuve Chapelle.
Henry Elder, like countless others ‘tried to do [his] bit’. No more could be asked of Elder or his family.

DUNDEE BLACK WATCH HERO WHO HAS BEEN MAIMED FOR LIFE TEACHES HIMSELF TO WRITE AND SKETCH WITH LEFT HAND. Private Herbert [sic] Elder, whose home address is 25 Ryehill Lane, Dundee, lies in the Grange Convalescent Home at Worthing with shrapnel wounds in both legs, wounds in the left hand, inflammation of both eyes caused by poisonous gas, and minus his right arm.
Exactly a month ago this lad of 19 left one of the big military hospitals to recuperate after the amputation of his arm, and since then he has taught himself how to write and to sketch with his left hand. Within a few weeks he will be discharged from the army as physically unfit to serve, and will return to Dundee, and endeavour once more to fight the battle of life.
The following story was told by Private Elder to a press representative who found the young Dundonian endeavouring to play a game of billiards at the convalescent home: –
At Neuve Chapelle.
“I was 19 years old when war was declared last August, and was employed as a lithographer at my native place, Dundee.
“I joined the Black Watch, and on February 22 I was drafted out to France, and went straight into the trenches. Six days later I took part in the Neuve Chapelle affair.
“It was a big battle, which lasted three days, and during that time we were bombarded heavily from seven in the morning until nine at night. I was wounded in the left hand, but after getting proper medical attention I got back into the fighting line after a matter of ten days’ rest.
“On May 10, when at Ypres, an officer called for volunteers to throw bombs into the German trenches. I fancied myself at that game, but almost at the start, while we were rushing across the open ground, a shell exploded quite close to me. I found myself lying on the ground with excruciating pains in my right arm and both legs.
Two Hours of Torture.
“For two hours I lay in torture, and then I saw a dark yellow cloud drifting over towards me and the other poor chaps who were wounded. It was the poisonous gas, and I could not move. Then came a choking sensation. All the while I could see other fellows suffering. Some cried aloud in awful voices, others appeared raging mad, and all clutched at the air or anything they could get their hands on. I became unconscious, and when I came to found myself in hospital.
“I found out that 360 of my battalion (the 4th) had been gassed. I think that is all I can tell you. My arm was amputated, and there is still some shrapnel in both legs, but what I find such a nuisance is the recurrence of the gas trouble with my eyes, which are very painful at times.
Left-Handed Writing and Sketching.
“I came out of hospital at the end of June, and my chief pastime since then has been an attempt to write and sketch left-handed.
“Do I belong to a fighting family? Well, I don’t know; but I’ve got four brothers in the army. One was in the 1st Battalion Black Watch, but has been missing since October. Another was with me in the 4th Battalion, but he was shot in the spine at Neuve Chapelle, and will never stand again. His case is worse than mine, because he’s married and has three children.
“Then there’s one in the R.F.A., and the last is in the Motor Transport.
“No. I don’t quite know what I will be doing for a living, bit something will come along, and even if it does not – well, I’ve tried to do my bit and it isn’t my fault that I’m not out there still. The Courier, Wednesday, 28 July 1915, 4.

DUNDEE HIGHLANDER WOUNDED. Private Henry Elder, of the 4th Black Watch, who, as reported in the “Courier” yesterday, lies in the Grange Convalescent Home at Worthing seriously wounded.
Private Elder in peace time was a lithographer to trade, and is 20 years of age. His father resides at 25 Ryehill Lane, Dundee, and his young wife in St Peter Street. He was married prior to leaving for the front in February last.
Private Elder is maimed for life, and is teaching himself to write and sketch with his left hand. The Courier, Thursday, 29 July 1915, 4.

Can you tell us more about James Elder'? Some additional facts, a small story handed down through the family or perhaps a picture or an heirloom you can share online. Contact our curator...