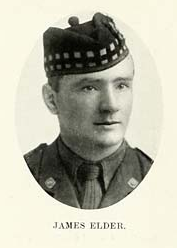 James Elder, a former dux medallist of Morgan Academy, was an undergraduate in the University of St Andrews when the war commenced. After a course of training in the University OTC he received his commission in the 13th Royal Scots. He had been almost thee years in the field when he was killed in action near Ypres in 1917.

Mr and Mrs W. A. B. Elder, Lochlee, 95 Pitkerro Road, Dundee, have been informed of the death in action on 29th December of their eldest son, Captain James Elder, Royal Scots.

Deceased was educated at the Morgan Academy, and was the gold medallist of session 1909-10.  Winning the Ferguson Bursary, he entered St Andrews University, and was studying for his honours degree when war broke out.  A member of the O.T.C., he received a commission in the Royal Scots in November, 1914, and had seen service at Gallipoli and Egypt before going to the Western front early in 1916.

Captain Elder took an active interest in the Union Debating Society, of which he was secretary, and was well known as an athlete, being a member of the ‘Varsity Rugby team which won the Midland League Cup on the last occasion it was played for.

It appears that James was not serving with the 13th Battalion at the time of his death. There is no mention of him in the 13th Battalion war diary and the Division to which this unit was part was the 15th (Scottish) Division at that time on the Arras front.

James was serving with the 5/6th Royal Scots, 14th Brigade, 32nd Division at the time of his death.

Can you tell us more about James Elder'? Some additional facts, a small story handed down through the family or perhaps a picture or an heirloom you can share online. Contact our curator...