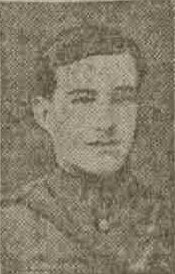 William is believed to be the stepbrother of Pte Alexander Ritchie, S/14037, 5th Battalion Cameron Highlanders, who was killed in action, 18.07.1916.

Gunner William Elder died on the 1st November 1918 however his parents did not receive the telegram until after the armistice.

After More Than Four Year’s  Service In France.

Gun. Wm Elder, RF.A., who was killed in action on 1st Nov., was the son of Mr and Mrs Elder, 12 Lowden’s Alley, Dundee.  Deceased was a reservist, and was mobilised at the outbreak of hostilities.  He had been in France for four years and four months, and during that time had been twice wounded and once gassed.  Before he was called up deceased was a painter with the North British Railway Company, and was engaged on the Tay Bridge.  His father was in the Royal Garrison Artillery.

Can you tell us more about William Elder'? Some additional facts, a small story handed down through the family or perhaps a picture or an heirloom you can share online. Contact our curator...