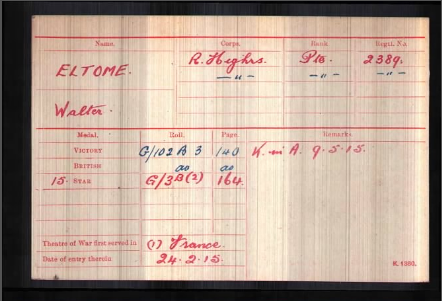 Walter has no known grave but is remembered on the Le Touret Memorial.

On Tuesday morning Mrs Eltome, Northleach, received conformation of the news that her son Walter had been killed at the front.  The sad news first arrived here on May 21st. through the medium of the young soldier’s friends at Dundee, where before the war he was engaged in the seed trade.  The family, however, waited for official news before giving up hope, and on Tuesday received the following : “Trenches, France.  Dear Mrs. Eltome,__ I have the very sad duty of writing you to tell you of the death of your son Walter, which occurred in action on the 9th inst.  He will be much missed in the Company, as he was a general favourite and exceedingly popular with all the members of D Company.  I am able to say, however, that your son suffered no pain.  Death was instantaneous, being due to a bullet wound in the head.  He died nobly doing his duty for King and country.  I wish to convey to you and your family the sincere sympathy of all the officers of his Company.—Yours sincerely, J. W. Harry Robertson. Lieut. 4th Black Watch.”  Mrs Eltome has two other sons with the new forces.

Can you tell us more about Walter Eltome'? Some additional facts, a small story handed down through the family or perhaps a picture or an heirloom you can share online. Contact our curator...