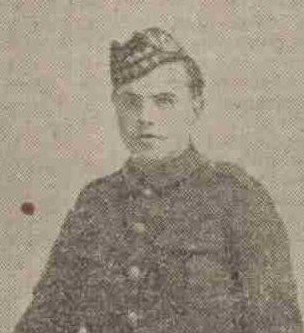 Another of Dundee’s gallant sons has laid down his life on the battlefield.

The sad intelligence that Private James Fairweather, Gordon Highlanders, was struck by a shell and instantaneously killed is contained in a letter received by his mother, who resides at 3 Hilltown, Dundee, from an officer of the regiment.  The writer goes on to say :–“We laid him to rest with every possible tribute of honour and respect in a military cemetery behind the lines.  I understand the cemetery will be carefully tended by the authorities in coming days in honour of the gallant dead.”

Private Fairweather enlisted in the Gordon Highlanders shortly after the outbreak of war.  Up to the time of enlistment he was employed as an engineer by Mr D. J. Macdonald, South St. Roque’s Works, Dundee.  The deceased soldier, who was 20 years of age, was at one time connected with the Wallace Swimming Club, Dundee.

Can you tell us more about James Kinnear Fairweather'? Some additional facts, a small story handed down through the family or perhaps a picture or an heirloom you can share online. Contact our curator...