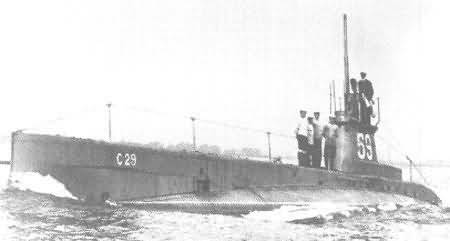 William has no known grave but is remembered on the Plymouth Naval Memorial.

The British submarine C-29 was on patrol with a crew of 17 some 70 miles off Scarborough and was connected to the trawler ARIADNE, when on 29 August 1915 she strayed into a minefield in the Humber Estuary, C-29 struck a mine and sank with all hands.

The C-29 was a Type ´C´ Class coastal submarine of the Group-2 design and formed part of a trawler – submarine decoy team in which the trawler towed the submarine trimmed down so that its deck was almost awash. When a German U-boat was sighted the trawler would alert the submarine, which would surface and fire one of its torpedoes.
C-29 was used twice successfully as a decoy for U-boats attacking the British fishing fleet until she finally sank with the loss of 17 lives, including that of a boy telegraphist, after it was towed accidentally into a minefield. The loss of C-29 brought an end to trawler/submarine operations.

Deceased was connected with the submarine flotilla at Dundee, and took up his residence at Broughty Ferry. He had been 17 years in the Navy.

NAVAL MAN DIES ON DUTY.–Leading Stoker William Henry Faux, whose home is at Argyle Buildings, Broughty Ferry, has died at the post of duty.  Such was the intimation that came on Wednesday night to his widow from the Admiralty. Leading Stoker Faux was for a time in the Vulcan.  He had served in the Royal Navy for 17 years, and had three medals.  He was in China on service during the Boxer Rebellion.  The Admiralty simply say “he died on duty.”  The deceased’s eldest son joined the Navy last week, and while it is noteworthy that quite recently his youngest boy–a lad of 13–saved a child from drowning at the pier, Broughty Ferry, by gallantly jumping in and rescuing him.  Faux leaves a widow and three boys.

Can you tell us more about William Henry Faux'? Some additional facts, a small story handed down through the family or perhaps a picture or an heirloom you can share online. Contact our curator...