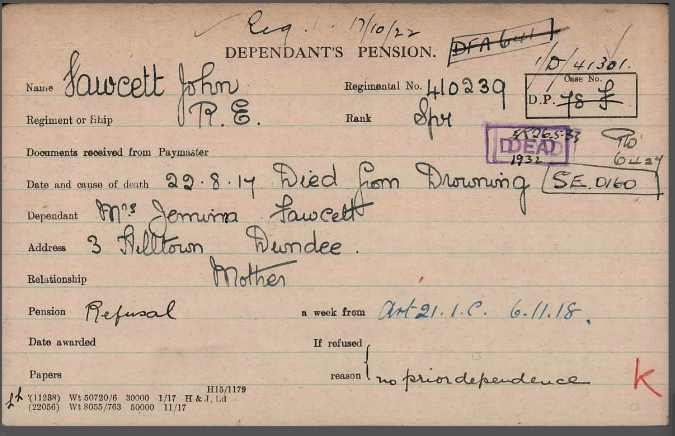 Johns death was a result of drowning.

John Fawcett (21), of Hilltown, Dundee a sapper in the Royal Engineers, was drowned in the River Mole at Esher through the capsizing of a raft on which he and several comrades were engaged in connection with the training in pontoon bridging.

A verdict of death through misadventure was returned at an inquest held last night.

A verdict of death by misadventure was recorded at an inquest held at Esher on Thursday on the body of Sapper John S. Fawcett, of the Royal Engineers, who was drowned in the river Mole the previous afternoon as the result of the capsizing of a raft, on which he and three other men were engaged in work connected with their training.  The deceased, who was 21 years of age, came from Hilltown, Dundee.  Sec. Lieut. Ritchie Smith said that the raft appeared to be in perfect order when launched, but after it got into the stream a corner of it gradually submerged.  He at once ordered a dinghy to the spot in case the raft should capsize, and called to the men to maintain their positions.  The corner of the raft got still further into the water, and the men were obliged to slide or jump off.  One of the men was pulled ashore with a lifeline and two others were rescued by comrades diving in.  Deceased was not seen to rise to the surface at all, and could not be found.  Eventually, after 25 minutes, his body was recovered with a drag.  Artificial respiration was tried for 45 minutes, but without avail.  Sergt. Holt, one of those who dived to the rescue, said the river was so muddy that it was impossible to see beneath the water.

Can you tell us more about John Strachan Fawcett'? Some additional facts, a small story handed down through the family or perhaps a picture or an heirloom you can share online. Contact our curator...