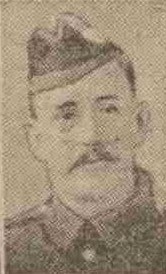 Pte. Feeney joined the ranks on the outbreak of the war, and had been serving with his regiment for fifteen months.  In a letter to his wife the officer commanding Pte. Feeney’s company says :–“Your husband was highly esteemed among us, and he died for King and Country when called upon to do so.”  A chum of Private Feeney, in informing Mrs Feeney of her husband’s death says—“He died carrying his gun into action, and did his duty nobly.”

Can you tell us more about John Feeney'? Some additional facts, a small story handed down through the family or perhaps a picture or an heirloom you can share online. Contact our curator...