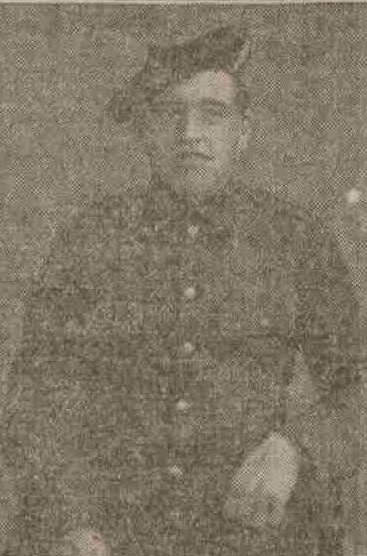 Lance- Corporal Alexander Ferguson, of Broughty Ferry, reported missing since the big fight at Loos on September 25th, has now been officially reported killed.  A letter from the War Office to that effect came to his home at 4 Lilias Place, Broughty Ferry, this week.

The Lance- Corporal joined the 2nd Black Watch when 17, and went with it to India.  On the outbreak of the war he came with the Indian Expeditionary Force to France.  He was wounded at the battle of Neuve Chapelle in March, and was invalided home, but was able to return to the fighting line in August.  Letters from comrades say they saw him wounded in the struggle at Loos, but after that all trace of him was lost.

Lance- Corporal Ferguson has a younger brother, Driver David Ferguson in the Royal Field Artillery; while his uncle Private William Ferguson of the 4th Black Watch, has also been missing since the fateful fighting of September 25th.

ANOTHER BROUGHTY SOLDIER LAYS DOWN HIS LIFE.

The worst fears regarding the fate of Lance- Corporal Alexander Ferguson, of the 2nd Black Watch, who since the battle of Loos has been reported, have now, unfortunately, been realised.  The parents of the lad, who reside at 4 Lilias Place, King Street, Broughty Ferry, have received a communication to that effect that Lance- Corporal Ferguson, previous reported missing, is now reported killed.

Another Monifieth soldier has been wounded during the recent fighting.  He is Private Alexander Ferguson, of the 2nd Battalion Black Watch.

Private Ferguson, who is 22 years of age, has been in the army for several years, and previous to the outbreak of hostilities was in India with his regiment.

Private Ferguson became attached to the machine gun section, and it was while operating with it that he was wounded in the leg.

Private Ferguson, whose relatives reside at No. 2 Burnside, The Milton, Monifieth, was employed as a bleacher at Panmurefield, Bleachfield before joining the army.

Mr William Ferguson, 2 Burnside Cottages, Milton, Monifieth, has been notified by the War Office that his son, Private Alexander Ferguson, of the 2nd Battalion Black Watch, is officially reported as missing since September 25.

Private Ferguson, was drafted from India to the western front, where he was wounded, returning to the firing line a few months ago.  He was last seen by some of his comrades to fall on the parapet of the trench, apparently wounded.  Ferguson, who was 23 years of age, was employed at Panmurefield by Messrs Watson & Shield prior to enlistment.

Another son of Mr Ferguson is reported missing since the same engagement.  Private W. Ferguson, 4th Black Watch, was wounded at Neuve Chapelle, and returned to the front in time to take part in the recent advance.  He was employed at Midmill Bleachfield, near Dundee.

Can you tell us more about Alexander Ferguson'? Some additional facts, a small story handed down through the family or perhaps a picture or an heirloom you can share online. Contact our curator...