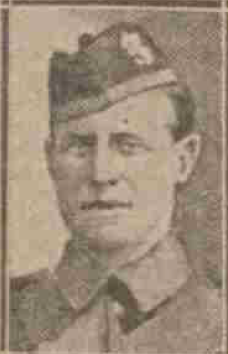 Frank has no known grave but is remembered on the Thiepval Memorial.

Official intimation has been received by Mr and Mrs William Ferguson, 19 Tait’s Lane Dundee, that their second son, Lance-Sergeant Frank Rose Ferguson, of the Black Watch, was killed in action on 23rd October.

Lance-Sergeant Ferguson, who was in his twentieth year, had been at the front for over twelve months. Prior to enlistment he was a blacksmith in the employment of Mr John Robertson, Balmullo.  A young man of fine physique, he proved himself a most capable soldier, and quickly gained promotion.  Lance-Sergeant Ferguson’s elder brother, George, who, before enlistment, was a member of the “Courier” reporting staff, has been on active service with the Royal Naval Division for a considerable time.

Can you tell us more about Frank Rose Ferguson'? Some additional facts, a small story handed down through the family or perhaps a picture or an heirloom you can share online. Contact our curator...