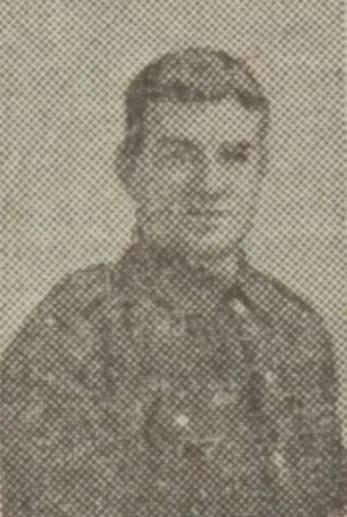 On 29 June 1915, 3725 Pte. Joseph Linton Ferguson, 4th Black Watch, died of wounds in France. The son of Emmet Ferguson, and husband of Ann Conway Ferguson, 17 Whorterbank, Lochee, he was one of three men of ‘Dundee’s Own’ to lose their lives that day. He is buried in Cabaret-Rouge British Cemetery, Pas de Calais, France, XVII. D. 24.

LOCHEE EX-NAVYMAN DIES OF WOUNDS. A WIFE’S SAD LOT. Pte Joseph Ferguson, a Lochee member of the 4th Black Watch, has died of wounds.
His wife resides at 26 Whorterbank, Lochee, has received a sympathetic letter from a captain informing her of her husband’s death. The letter reads: –
“It is with the deepest regret that I write to inform you that your husband was wounded yesterday forenoon and died in the evening. He was buried in the cemetery for British soldiers near here this morning. He is greatly missed and deeply mourned by the officers and men of his company. It may be some consolation to you to know that he died fighting for his country.”
Private Ferguson was 31 years of age, and previous to attaching himself to the 4th Black Watch in December he served for ten years in the navy. He was formerly employed as a fireman by Cox Brothers, Ltd. Mrs Ferguson’s only child has died since her husband left for the front. The Courier, 9 July 1915, 6.

Can you tell us more about Joseph Linton Ferguson'? Some additional facts, a small story handed down through the family or perhaps a picture or an heirloom you can share online. Contact our curator...