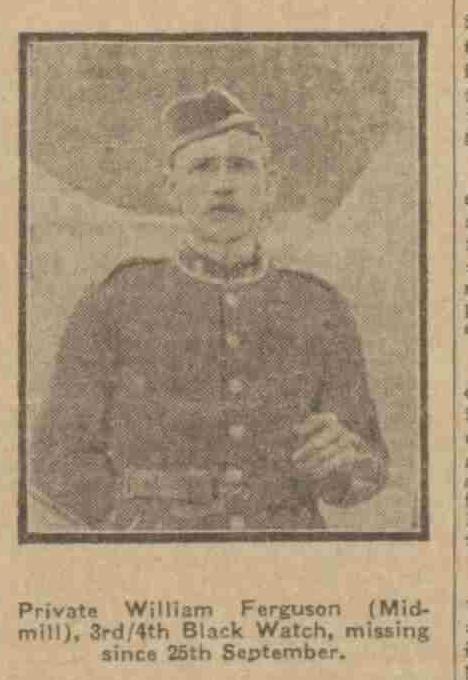 Mr William Ferguson, 2 Burnside Cottages, Milton, Monifieth, has been notified by the War Office that his son, Private Alexander Ferguson, of the 2d Battalion Black Watch, is officially reported as missing since September 25.

Private Ferguson, was drafted from India to the western front, where he was wounded, returning to the firing line a few months ago.  He was last seen by some of his comrades to fall on the parapet of the trench, apparently wounded.  Ferguson, who was 23 years of age, was employed at Panmurefield by Messrs Watson & Shield prior to enlistment.

Another son of Mr Ferguson is reported missing since the same engagement.  Private W. Ferguson, 4th Black Watch, was wounded at Neuve Chapelle, and returned to the front in time to take part in the recent advance.  He was employed at Midmill Bleachfield, near Dundee.

In September, 1915, Private William Ferguson, 4th Black Watch, was reported missing.  Mrs Ferguson, who with her three young children reside at 16 Paton’s Lane Montrose, has now got official intimation that her husband had been killed or had died since the above date.  Private Ferguson, who was 34 years of age, was a native of Friockheim, and was employed at Midmill Bleachfield, near Dundee.  Being a Territorial, he was called up on the outbreak of war.  He was wounded at the battle of Neuve Chapelle, and some time after his recovery he again went to France, and was reported missing three or four weeks after his arrival at the front.

September, 1915,__Private William Ferguson, 4th Black Watch, husband of Mrs Ferguson, who with her three young children reside at 16 Paton’s Lane Montrose, reported missing since this date and afterwards officially notified as having been killed or died.  Private Ferguson, who was 34 years of age, was a native of Friockheim, and was employed at Midmill Bleachfield, near Dundee.  A Territorial, he was called up at the outbreak of war, and was wounded at the battle of Neuve Chapelle.  It was three or four weeks after his return to the firing line that he was reported missing.

Mr William Ferguson, 2 Burnside, Milton by Monifieth, would be grateful beyond words if any one could give him any information regarding the fate of his two sons, Alex and William, who have been missing since the battle of Loos on 25th September.  Lance-Corporal Alexander Ferguson resided with his father, but was a regular army man in the 2nd Black Watch, being drafted direct from India where he was when war broke out, to the scene of operations.  Private William was married, and resided at Midmill Bleachfield.  He leaves a wife and two children.

Can you tell us more about William Ferguson'? Some additional facts, a small story handed down through the family or perhaps a picture or an heirloom you can share online. Contact our curator...