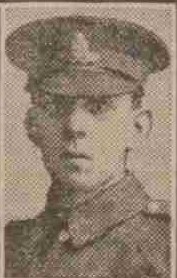 Deceased, who was 22 years of age, was well known in Broughty Ferry.  He joined the R.G.A. three years ago, and had been at the front over six months.  Shortly before enlistment deceased was employed in Monifieth Foundry.

Can you tell us more about John Lorimer Ferrier'? Some additional facts, a small story handed down through the family or perhaps a picture or an heirloom you can share online. Contact our curator...