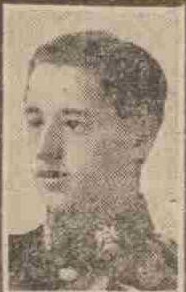 Parents recorded as being at 32 Cotton Road, Dundee. Next of Kin listed as Elizabeth Fleming (grandmother) 11 Robertson St, Dundee

Official intimation has been received that Private David Fleming, Royal Scots Fusiliers, has died of wounds.  Deceased who was 20 years of age, was prior to the outbreak of war employed with Messrs Wm. R. Stewart & Sons, hacklemakers, Dens Road, Dundee.  Private Fleming, who had been almost six months at the front, is a grandson of Mrs Thomas Fleming, 11 Robertson Street, Dundee.

Can you tell us more about David Birrell Fleming'? Some additional facts, a small story handed down through the family or perhaps a picture or an heirloom you can share online. Contact our curator...