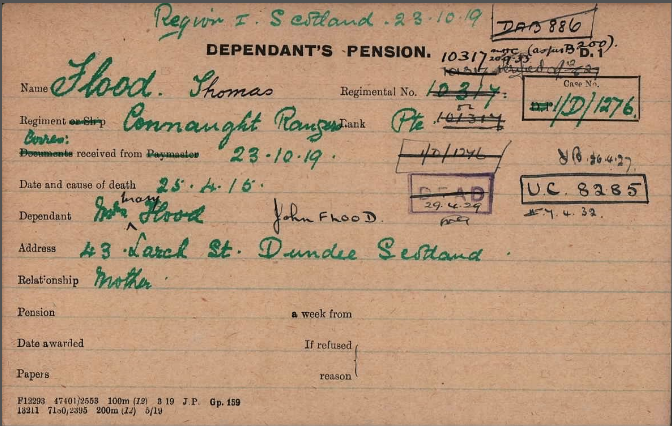 For reasons unknown, Thomas is not listed on the original Dundee Roll of Honour, he has no known grave but is remembered on the Menin Gate Memorial. He was the cousin of Pte James Flood, 9542, 6th Battalion Cameron Highlanders, who was killed in action, 11.04.1917.

Thomas was reported Missing believed Killed in action in April 1915 in the area of St Jean,  (now Sint Jin),  Ypres  in the second battle of Ypres.   The 1st Connaught Rangers as part of the Lahore Div being rushed forward to plug gaps on the left flank of the Canadians assaulting St Julian in that battle after the French colonial troops had broken and retreated after the German release of phosgene gas.

Thomas was one of a significant casualty list for the Connaughts,  (exceeding 320 casualties on the day), that day and is commemorated on the Menin Gate in Ypres

Can you tell us more about Thomas Flood'? Some additional facts, a small story handed down through the family or perhaps a picture or an heirloom you can share online. Contact our curator...