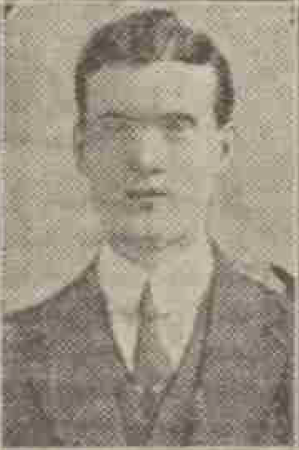 John enlisted at Dundee on 8th December 1915 at the age of 25 years where he had previously been employed as an Assistant Overseer in a Jute Spinning mill and he was living at the family home in 52 Dallfield Walk Lochee.  He had 2 older brothers,  Peter and Robert and 2 older sisters, Catherine and Isabella both Married.

He initially registered for enlistment to Kings Own Scottish Borderers in December 1915 presumably under the Derby scheme as he was mobilised to the KOSB Depot on 1 March 1916  and later was transferred  to Royal Scots Fusiliers on 10 June1916.  Following his training he embarked for the BEF landing in France on 14 June 1916 from where he was posted to 2nd Bn RSF in the field.  His war service was however tragically short as he was reported missing and later presumed to have been killed in action on 30 July 1916

The action involving 2nd RSF on 30 July 1916 was the famous attack on Guillemont by 90 Bde of 30th Division of which 2 RSF were a part. The Bn successfully took the village but having suffered very heavy casualties in the attack and subsequent defence against German counter attacks they were obliged to fall back and the village was not retaken until a third attack on 8 August.  John was amongst the casualties of that day being initially reported missing but later presumed to have been KIA.  He is commemorated on the Thiepval Memorial to the Missing of the Somme

Can you tell us more about John Flynn'? Some additional facts, a small story handed down through the family or perhaps a picture or an heirloom you can share online. Contact our curator...