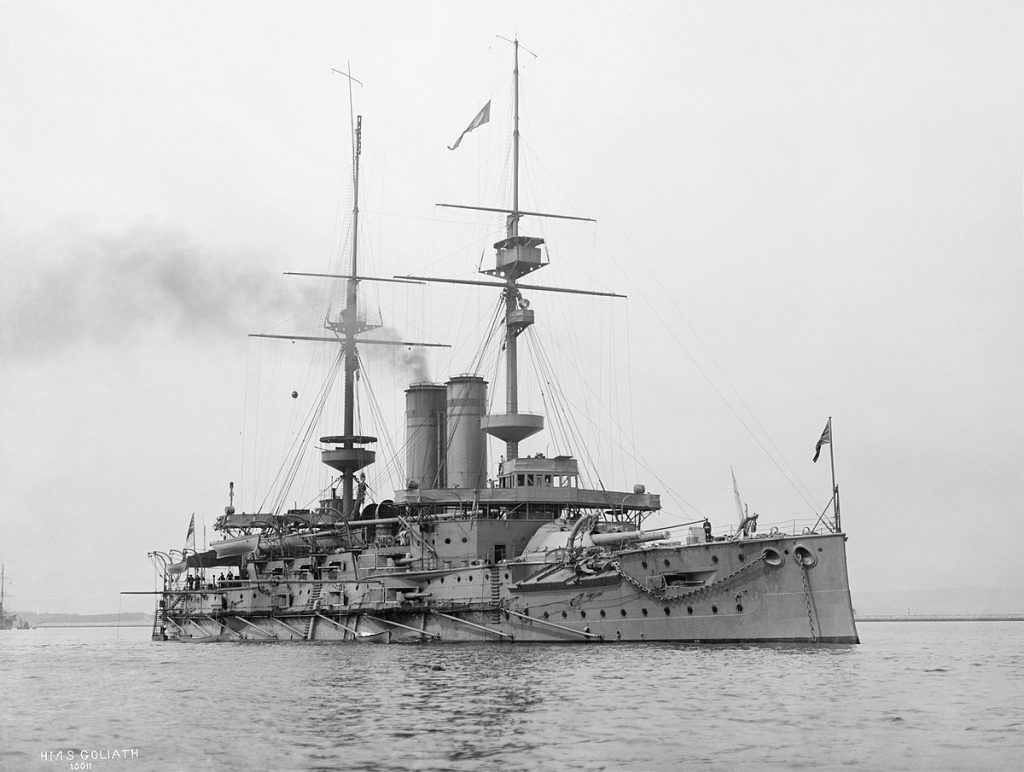 Charles has no known grave but is remembered on the Portsmouth Naval Memorial, he was serving aboard HMS Goliath which was a Royal Navy 1st class battleship; built in 1900 at the Navy´s Chatham Dockyard. He was the brother of Pte William Forbes, 9799, 1st Battalion, Kings Own Scottish Borderers, who was killed in action, 04.06.1915.

Stoker Charles Forbes, a Dundee Man, has had nothing short of a miraculous escape from death on the ill-fated Goliath, sunk in the Dardanelles operations.

When news of the disaster to the British man-of-war was made known, considerable anxiety for his fate was occasioned his relatives in Dundee, but on Tuesday afternoon doubts as to his safety were laid to rest.  Information was then received by letter from an hospital ship somewhere in the Dardanelles, which pointed to Forbes being incapacitated aboard the former vessel at the time of the torpedoing of the Goliath.  From a letter, apparently written at his dictation, it seems that he is laid aside with a poisoned hand and a sprained thigh, so that there is good reason to believe that he was not aboard the Goliath when she carried her large freight of gallant British tars to the bottom of the Dardanelles.

Born in Dundee, Forbes is 23 years of age, and was married two years ago.  He resided at 1 Leng Street, and previous to the outbreak of war was stationed at Portsmouth.  He only joined the naval service three months before the commencement of hostilities, and has a brother serving the colours with the 1st K.O.S.B.

A remarkable coincidence is that while aboard the hospital ship, he met a cousin of his, also temporarily rendered hors-de-combat.

Peculiarly sad are the circumstances connected with the death of O.S. Charles Forbes, 1 Long Street.  It was known that prior to the sinking of H.M.S Goliath he was serving on that vessel, but the anxiety felt by his relatives after the receipt of the tragic news from the Dardanelles was dispelled by the receipt of a message, although unofficial, to the effect that at the time of the catastrophe he was sick in hospital. Unfortunately, this report has proved to be erroneous, an official communication yesterday reaching his relatives that he had drowned.  Deceased, who was 23 years of age, was married and leaves a widow and one child.

FORBES___Drowned in the Dardanelles, on the 12th May, Charles Forbes, aged 23, beloved husband of Mary Rhynd, No 1 Leng Street, Dundee.

FORBES___Drowned in the Dardanelles, off H.M.S. Goliath, on the 12th May 1915,  Charles Forbes, youngest son of William and the late Helen Forbes, aged 23 years.  Inserted by father and sisters, 53 Hawkhill, Dundee.

Can you tell us more about Charles Forbes'? Some additional facts, a small story handed down through the family or perhaps a picture or an heirloom you can share online. Contact our curator...