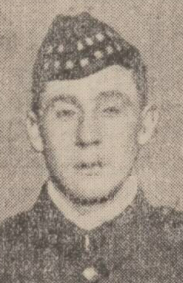 BY A DUM-DUM BULLET.

Private William Forbes, Dundee, of the King’s Own Scottish Borderers, has come through many tight corners since he went out to the scene of action in the middle of August.

Forbes, who is a member of the 2nd Battalion K.O.S.B., has his home at 36 Arbroath Road.

To the “Courier” Forbes stated that the K.O.S.B. lost heavily in the retreat from Mons, they being one of the regiments that had to do a large share of the covering work during the retiral.

The K.O.S.B. were then transferred to Ypres, where they came in once more for a hard time. “We lost,” stated Forbes, “our commanding officer, Colonel Stevenson, and also Major Haig, second in command, both having been wounded, and the ambulance van in which they were travelling being captured by the enemy.

“One night,” continued Forbes, “three platoons of my company were sent out, but I was fortunate enough to be in the fourth, which was left behind in the dugouts, for the Germans made an attack and nothing more was heard of a single man of these platoons.”

The K.O.S.B. received a reinforcement of about 300 men at Ypres, but at La Bassee they were again heavily hit.  The London Scottish had had to give way in certain trenches, and the K.O.S.B. received the order to retake these.  This was done at the point of the bayonet, but the Borderers lost so heavily that they found they were too weak to continue to rush the German trenches.  This, however, was accomplished with the assistance of the Scots Guards and West Kents.

At Messines they were standing waist deep in the trenches in water and mud, and it was impossible to advance. “It was there.” Stated Forbes, “I lost my chum Thomas.  He was an Aberdeen man, and was shot in the head with a dum-dum bullet.  His head, poor fellow, was opened in two, and no such wound could possibly have been inflicted by an ordinary bullet.”

Private Forbes was wounded in the ankle on one occasion when leaving the trenches, and as he was also suffering from frostbite, he was invalided home.

Private Forbes gave an interesting account of how a couple of German spies were caught in the British lines.  One of the spies was in the uniform of a British artillery officer and the other in the uniform of a Royal Engineer officer.  The two were so persistent in making inquiries as to the whereabouts of “Headquarters” that a sergeant became suspicious, as he thought it somewhat strange that British officers should be so ignorant.  He reported his suspicions to a Captain.

“The last we saw of the pair.” Said Forbes, “was them being taken away by the military police.

SOLDIER WHO HAD REMARKABLE MEETING.

The disquieting information was received in Dundee on Thursday by the relatives of Private William Forbes, 1st K.O.S.B., who resides at 53 Hawkhill, that he is posted as missing.  Private Forbes is 26 years of age, and has been connected with his regiment for a period of nine years, during which time service has been spent both in Egypt and India.  When at the Dardanelles he had a meeting with, first, his father, and then with his brother.  The latter has since been killed in the disaster which befell H.M.S. Goliath.  Private Forbes’ parent at the time of their meeting was engaged in the capacity of a fireman on board a transport vessel.  He offered himself for more active service, but was refused on account of his years.

Can you tell us more about William Forbes'? Some additional facts, a small story handed down through the family or perhaps a picture or an heirloom you can share online. Contact our curator...